Julia and Riley came all the way from Seattle for their wedding on Sanibel Island. With direction from Tori, the wedding manager at Casa Ybel and Patricia Slater, a wedding planner on Sanibel Island for over twenty five years, the wedding was a joy to witness. Julia’s sister, Francesca, helped with the wedding photography, as Frank had to walk the bride down the aisle. The day started around 4pm with a ‘first look’. Riley presented Julia with her bridal bouquet, a beautifully colored creation by Floral Artistry of Sanibel Island. Riley had his back turned as Julia walked along the sidewalk at Casa Ybel Resort and tapped him on the shoulder. See a few pictures below for the loving and joyful emotions that Francesca captured. For the intimate ceremony, siblings and parents of the bride and groom gathered on the beach behind the Thistle Lodge Restaurant. Patricia Slater performed the ceremony with Julie Cromwell providing music on her cello. Julia’s niece, Olive, presented the rings during the ceremony. Family pictures were taken after the ceremony with Julia’s nephew, two year old Atticus providing some happy laughter as he played in the sand in his tie and jacket. Friends and family of Julia and Riley arrived for an outdoor tent reception on the lawn overlooking the Gulf of Mexico. Music was provided by Eric Tharp and dancing continued until 10pm. Shown here are some of our favorite images we captured at my daughter’s wedding at Casa Ybel. 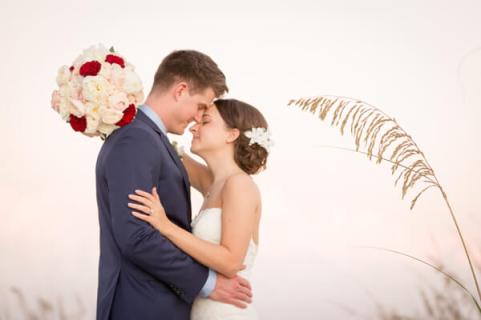 Julia and Riley met seven years and seven months ago, when they were seventeen. Their first interest together was riding dirt bikes on the trails. After high school graduation, they went to the University of Florida in Gainesville. They completed their four years and continued into a masters program, Julia in Fisheries and Aquatic Sciences and Riley in Construction Management. With that completed, they moved to Seattle for their employment and phoned home to their parents that they set their wedding date.